Is Revelation an astrological myth?

Consider the evidence that John's vision is literally a vision of the heavens, which to New Testament-era people meant literally the visible sky and the further heavens above it.  After taking dictation of seven letters from "one like a son of man", he sees a vision:


behold, a door standing open in heaven! And the first voice, which I had heard speaking to me like a trumpet, said, “Come up here, and I will show you what must take place after this.” At once I was in the Spirit, and behold, a throne stood in heaven, with one seated on the throne. And he who sat there had the appearance of jasper and carnelian, and around the throne was a rainbow that had the appearance of an emerald. Around the throne were twenty-four thrones, and seated on the thrones were twenty-four elders, clothed in white garments, with golden crowns on their heads. From the throne came flashes of lightning, and rumbling and peals of thunder, and before the throne were burning seven torches of fire, which are the seven spirits of God, and before the throne there was as it were a sea of glass, like crystal.

These are all sky phenomena.  (Regarding the sea of glass, remember Genesis 1 saying there are waters up in heaven, and a canopy separating the waters above from the waters below.)  He who sits on the throne in the sky seems to be God, especially if ones compares the figure in Ezekiel 1.

Coming back to the "one like a son of man":


In his right hand he held seven stars, from his mouth came a sharp two-edged sword, and his face was like the sun shining in full strength.

This son of man is standing in the midst of seven lampstands, and holds seven stars in his right hand.  Up by the throne there is next also seen:


a Lamb standing, as though it had been slain, with seven horns and with seven eyes, which are the seven spirits of God sent out into all the earth.

Again with the seven items.  This would seem to be Jesus in his anthropomorphic and ovine avatars: of course one of Jesus' roles is to be the replacement for the life-saving sacrificial lamb of Passover.

If John is seeing the Lamb with seven stars in the heavens, he might be talking about a vision inspired by the constellation Aries with the seven Pleiades alongside.  We call Aries the Ram, but in ancient Hebrew culture it was a lamb.  With his head pointing backwards, we can imagine him "slain".  Just next to Aries on the left is the cluster of seven stars called the Pleiades.  Being on the ecliptic, with the Sun passing through annually, we might see an explanation of his face "like the sun shining". We also have by the throne some creatures of the following kinds:

Like much in Revelation, they seem to be based on these creatures from Ezekiel:

The four same human and animal faces.  As it happens, the Lion and the Bull also lie on the ecliptic (they are signs of the Zodiac), while the Eagle lies just off it, in ancient Greek astronomy.  Perhaps the human face is the Hunter (Orion), just below the Bull:

Looking back at the context for the borrowing in Ezekiel, the sky references are obvious:

The astronomical references too, as the creatures turn on wheels within wheels.  These are their orbits:

Now as I looked at the living creatures, I saw a wheel on the earth beside the living creatures, one for each of the four of them. As for the appearance of the wheels and their construction: their appearance was like the gleaming of beryl. And the four had the same likeness, their appearance and construction being as it were a wheel within a wheel. When they went, they went in any of their four directions without turning as they went.

The myriad angels who praise God in the throne-room are probably myriad stars as well.  We know that in Revelation stars are actually animate beings:


I saw a star fallen from heaven to earth, and he was given the key to the shaft of the bottomless pit.

If we imagine the Four Horsemen of the Apocalypse riding horses with wings, which is unstated, then the winged horse is another nearby constellation reference.  Perhaps there is a horse reference anyway.  One of the horsemen has a balance in his hand: Libra?  Perhaps the horrid locusts that "have tails and stings like scorpions" reference the constellation Scorpio.  As for the twenty-four elders around the throne, Greek astrology identified 24 important stars, one North and one South of each sign of the Zodiac, but perhaps this double-12 represents 12 Gentile tribes for each of 12 Jewish tribes, or some such numerology.


a great sign appeared in heaven: a woman clothed with the sun, with the moon under her feet, and on her head a crown of twelve stars. She was pregnant and was crying out in birth pains and the agony of giving birth. And another sign appeared in heaven: behold, a great red dragon, with seven heads and ten horns, and on his heads seven diadems. His tail swept down a third of the stars of heaven and cast them to the earth. And the dragon stood before the woman who was about to give birth, so that when she bore her child he might devour it. She gave birth to a male child, one who is to rule all the nations with a rod of iron, but her child was caught up to God and to his throne, and the woman fled into the wilderness

There is of course a woman in the Zodiac, along the ecliptic, "clothed with the sun": Virgo, associated with virginity and fertility.  Depending how one counts, one can see twelve stars around her head on the right:

Not far from Virgo is the Serpent, perhaps referenced by the Dragon (a type of serpent according to Strong's Concordance).  The Dragon is associated again with the number seven, and The Serpent has 7 prominent stars about its head (notice the double star): 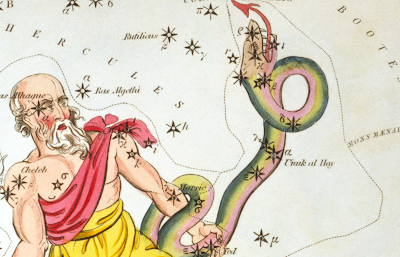 None of this is a proof, but the correlations are interesting.
Posted by WA at 14:45 No comments: Links to this post