The trappings of civilisation: two books on American Indian history 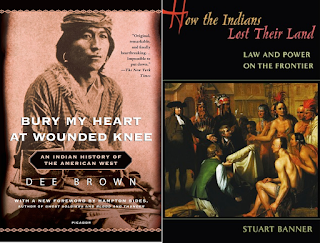 "They made us many promises, more than I can remember, but they never kept but one; they promised to take our land, and they took it."

Reading these books gets heartbreakingly repetitive because the same story repeats ad nauseam: the complacency of the white settlers in the superiority of their civilised ways ends up in the death and expropriation of Indian nations.

Dozens of examples could be given:

What good did it do Indians of the colonial period that they were (contrary to popular belief) secured by law as proprietors of their lands—when every means of fraud and threat was excused to extort it from them under colour of free consent to its sale?

What justice was there in America's great city-on-a-hill representative democracy—when representatives were elected by land-hungry settlers and sweetened by speculators?

What law was it that promised to uphold treaties preserving Indian lands from invasion by gold-panners, buffalo-hunters and homesteaders—when the government pronounced itself unable to keep them out, so the Indians had better sell up while they had anything left to sell?

What assistance was offered by humanitarian do-gooders in trying to settle tribes as farmers—when their paternalist method was to punish Indians for trying to make a living the way they wanted, on lands promised to them for ever by sacred treaty?

These are books to make you despair of the progress supposedly made in the West during centuries of philosophy, art, science, law and government.  When it came to the test, a representative sample of our culture, fortified by self-confidence as the pinnacle of human achievement, turned out to be a wave of genocide implacably sweeping a continent.

The series of events runs over and over again: a human wave encroaches on Indian land; the government promises by treaty to protect the Indians from invasion if only they will consent to removal onto a westward reservation; the reservation is invaded and the government protests it is powerless to halt the human wave, though if only the Indians will consent to removal onto a yet further westward reservation, their land will be inviolate for eternity; the reservation is invaded and nothing done to halt it; Indians use force to defend their land; the press whips up a great terror of scalpings and rapes; the army arrives to disarm the Indians; Eastern humanitarians or wolves in friends' clothing urge them to consent to a reservation; the next incident of violent conflict with settlers brings on the army; villages are rushed and massacred, chiefs negotiating under a flag of truce are arrested, bitter-enders are hunted through the mountains; the tribe submits to a yet smaller, more worthless reservation.  Repeat.

Won't you settle down and sow Indian corn like the whites will show you how?

These are books to make you wary of the nostrums of Western civilisation: democracy, law, treaty, property, freedom.  They are the sacred foundations of our culture, yet all the while white people preached them through the centuries in America, they were trappings of civilisation clothing a reality of force and contempt towards a whole people.  The damage was done partly by evil people consumed with hatred.  But perhaps the larger part was done by people who believed they were on the right side of history, people who rarely bothered to ask the people affected what their reality was on the ground, and filtered their answers through their own preconceptions even when they did.

I doubt whether this passage written by General Carleton, upon the successful removal of the Navajo to a reservation unfit for human habitation, can be beaten for complacency and contempt:


These 6000 mouths must eat, and these 6000 bodies must be clothed. When it is considered what a magnificent pastoral and mineral country they have surrendered to us—the country whose value can hardly be estimated—the mere pittance, in comparison, which must at once be given to support them, sinks into insignificance as a price for their natural heritage...

The exodus of this whole people from the land of their fathers is not only an interesting but a touching sight. They have fought us gallantly for years on years; they have defended their mountains and their stupendous canyons with a heroism which any people might be proud to emulate; but when at length, they found it was their destiny, too, as it had been that of their brethren, tribe after tribe, a way back toward the rising of the sun, to give way to the insatiable progress of our race, they threw down their arms, and, as brave men entitled to our admiration and respect, have come to us with confidence in our magnanimity, and feeling that we are too powerful and too just a people to repay that confidence with meanness or neglect—feeling that having sacrificed to us their beautiful country, their homes, the associations of their lives, the scenes rendered classic in their traditions, we will not dole out to them a miser's pittance in return for what they know to be and what we know to be a princely realm.

So many self-satisfied civilised people going so wrong should give us pause: what barbarities are our own trappings of civilisation clothing, that posterity will damn us for?
Posted by WA at 10:23 No comments: Links to this post